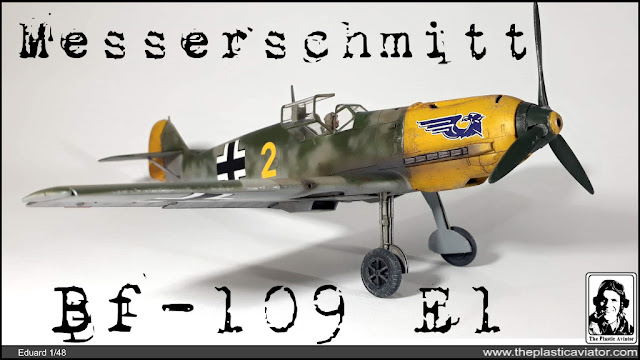 Hardly any other aircraft is so closely associated with the German Air Force in World War II as the Messerschmitt Bf-109. "One-o-nine" is also a household name internationally. A model of this type belongs in almost every collection of airplane lovers.

The I. group was established on November 1, 1938, as I./JG 433 in Manching near Ingolstadt. From this, the I. / JG 52 emerged in 1939. On September 8, 1939, the JG 52 achieved its first confirmed victory. A French reconnaissance aircraft was intercepted and destroyed in the Karlsruhe area. By the end of 1940, the JG had lost 52 aircraft and 53 pilots. Shot down 177 enemy planes. At the end of the war, JG 52 accounted for nearly 9,000 victories. Well-known pilots such as Erich Hartmann, Gerhard Barkhorn and Günther Rall belonged to this unit. These three pilots alone were able to claim 928 air victories.

During all this time, the JG-52 flew the Messerschmitt Bf-109, from models E to K.

Eduard has been offering these Profipack models for years. In the box, there is everything you need for a good model. In addition to highly detailed plastic parts, etched parts, pre-cut paint masks and decals of excellent quality are included.

The model of the 109 E series also offers the possibility of displaying the engine.

A good review can be found at the IPMS Deutschland.

For my model, I got a figure from Aerobonus. With this, however, I had to improve the arm position so that it fits completely into the cockpit.

The build of the "One-o-nine"

Construction begins with a very detailed DB601 engine. Too bad actually to make it disappear under the hood. However, I wanted the machine to be the "Yellow 2" of the JG-52. I liked the yellow nose with the striking emblem.

The cockpit followed after the engine. There are no difficulties in the fit during the entire construction. The enclosed etched parts for displays. The model also includes alternatives for those who do not want to use etched parts.

Aerobonus is also a brand from Eduard. Excellent, detailed figures on the 1/48 scale are offered under this name. Since I wanted to have a different arm position, I decided to convert it. For this purpose, the arms were cut into several sections. These were connected with wire pins. After the new stance was found, the missing pieces could be remodeled with filler. The painting was done with Revell Aqua Color. Washing with oil paints provided more contrast and depth. To reinforce this, dry brushing with several shades was done. Oil paints are particularly suitable for this.

As with the previous areas, there are no difficulties here. Fit and detailing are at the highest level and need not shy away from the Asian competition. 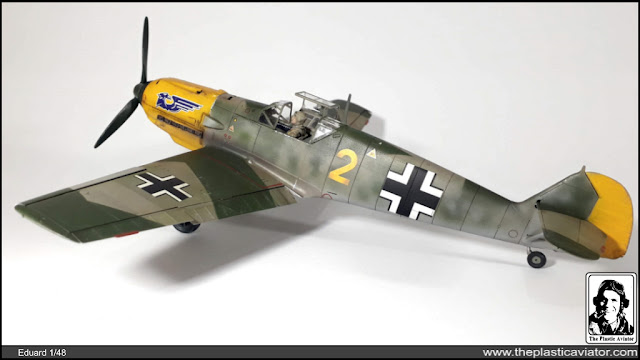 Yes! Even if handling is not easy, I like to use these colors. If you want to know which Revell colors are suitable for Air Force aircraft from World War II, you can read this here: Revell on RLM
My prototype machine was painted in RLM 70/71 in the early camouflage dress. After the Polish campaign, the machine was repainted with the colors RLM 02/70.

The yellow nose and rudder were attached for better friend/foe identification during the Battle of Britain. 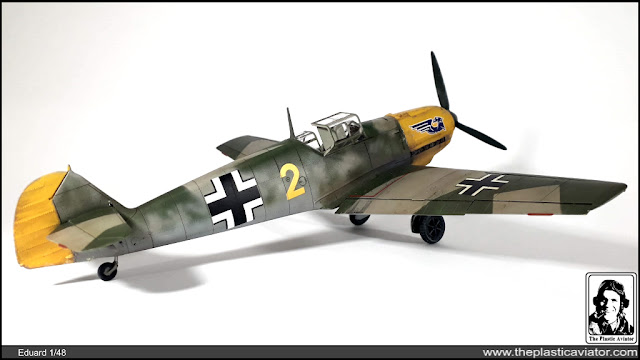 A question of personal touch

The machines of that time must have been very well maintained. Nevertheless, I wanted to give my 109 a used look. The model was aged using the usual methods. Washing from oil paints, paint flaking with a sponge and brush. Especially when washing, I have to be more careful the next time. This time it looked more like a filter, which changed the color of the paintwork significantly. This can be seen very well in the wing/slat. Last but not least, I applied the mandatory exhaust plumes with the airbrush. 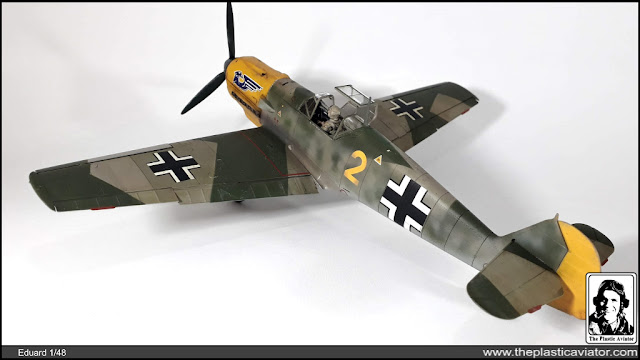 Wow! Eduard delivered a great model that was a lot of fun.
It will definitely not be the last of this brand.

We are looking for contributer!

Do you like scale modeling, taking pictures and to write about it?
Get in touch with me! Please send me an email! 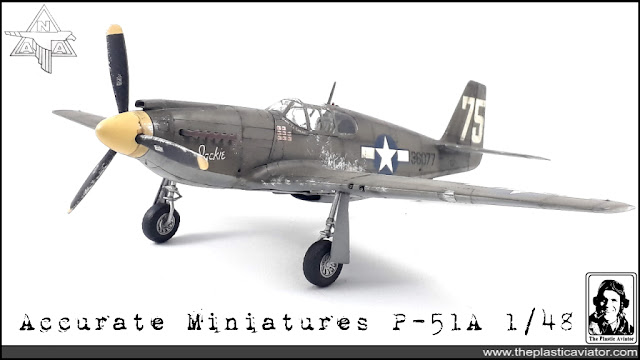